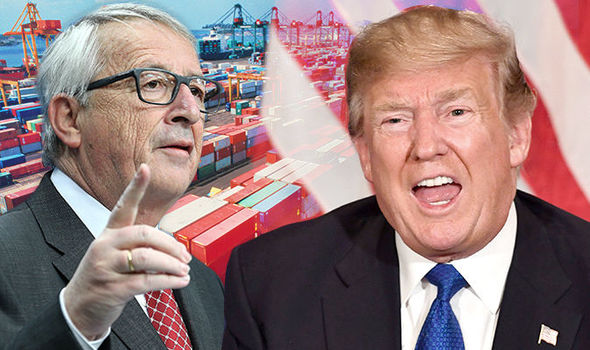 As Trump makes it more and more likely that the EU and U.S will go into a trade war, more and more investors, consumers, media, and citizens are worried.

Trade wars start off simple. I tax you, you tax me, we tax each other.

The idea of a trade war makes sense, you did something I don’t like, so I’ll make you pay more for what you want. However, the risks they bring could be massive and affect local economies. Trade wars risk escalating extremely fast, ruining markets and geopolitical relationships.

Free-trade is the best trade. Most economists agree.

Different countries have different production systems and sources. International trade is not driven by the absolute costs of production, but by the opportunity costs of production. Thus, different countries could, on the one hand, have a surplus in different products (more cost-efficient), while for other products, they have to import them from another country. For each country, the products they need to import, and the products they want to export vary. It is a balance created following the comparative advantage system.

This is why you can’t expect a flat rate trade tax on all goods of a certain type, some countries want to get rid of more, and are willing to sell it for less, while others don’t sell it all but instead sell a completely different product. The issue with this is that the country who needs iron and wants to sell fish may feel cheated because they pay more for importing iron than they earn exporting the same amount of fish to the country they are importing the iron from. Once the country feels cheated, they try to raise the trade tax on fish, which then angers the other country into raising their iron tax. In the end, they either come to an agreement to lower all trade taxes, or the industries for iron and fish suffer greatly due and risk failing completely.

Free trade, on the other hand, makes it so no product is weighed or taxed differently.

The problem today is that Trump has shown, through his interactions with China, he has no fear of entering dangerous trade wars, acting like a toddler, and not giving in until he gets his way. This leads to big risks for the EU. A trade war with the U.S would no doubt lead to economic, as well as political, troubles in numerous industries.

The EU needs to take a stand leveraging the new data on US trade balance that revealed a weakness in Trump’s policies. The US President, during the electoral campaign, promised new tax fairs on foreign products in order to foster internal production and reduce the trade balance deficit. This is not happening even though the new trade barriers issued against China.

While we were so close to a free trade agreement with the U.S during Obamas’ presidency, it seems that since Trump ripped up the TTIP, the trade relationship between the EU and the U.S has only gotten worse.

EU trade chief Cecilia Malmström has given warning that the U.S. will likely impose tariffs on approximately $25 billion worth of European products, as a result of a dispute over airline subsidies. Furthermore, there have been numerous statements made by trump saying that the U.S has been taken advantage of and that there will be reprisals. He has made threats regarding the auto industry in Europe, and imposing tariffs there, as well as numerous other sectors.

The EU must try and remedy trade relations between the U.S and EU before economic issues turn into political disputes, and the long-lasting ally relationship between the EU and the U.S falls for good. It is necessary for Europe to enter into a new free trade agreement with the U.S.

The EU should also stand its ground and not allow the situation to escalate into a full-grown trade war.

Finally, the citizens, need to make sure that their voices are heard, and that the governments of the U.S and EU hear their cry to avoid this costly war.

Trade wars do nothing to benefit economies or citizens, and they need to be stopped early on.