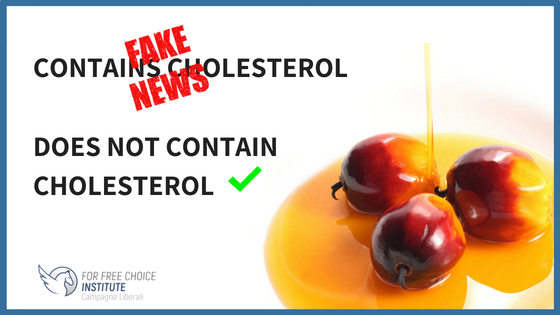 Linking palm oil to cholesterol is an old argument put forward by those who wanted, at all costs, to see it disappear from the face of the earth. Articles, blogs, fake-news, social network campaigns have all invaded the minds of consumers, influencing their choices and making fools of them – don’t eat palm oil because it will make you ill and increase your cholesterol levels. Isn’t it a shame that this is a false correlation with no scientific evidence to back it up, as demonstrated by different sources and authoritative studies.

If we look at the data published in the Food Composition Database for Epidemiological Studies in Italy, courtesy of the European Institute of Oncology, what do we find when it comes to palm oil and cholesterol? In 100 g of palm oil, the level of this component, an excess of which in the human body brings with it the risk of cardiovascular diseases, is 0 mg, as shown in the following table. 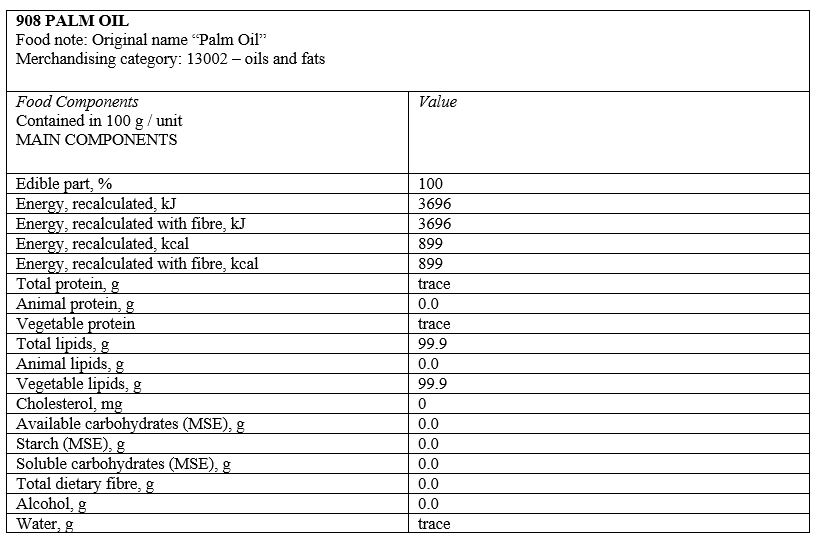 What other ingredients, commonly found in snacks, biscuits, preparations etc., contain more cholesterol? Butter, for example, contains 250 mg. If, as different trade and consumer associations maintain, this ingredient is the main substitute for palm oil, then the level of cholesterol contained in the snacks that we give our children every day has increased out of all proportion. But it is not the only fat to have more cholesterol than palm oil and other vegetable oils, as is apparent from the tables below. 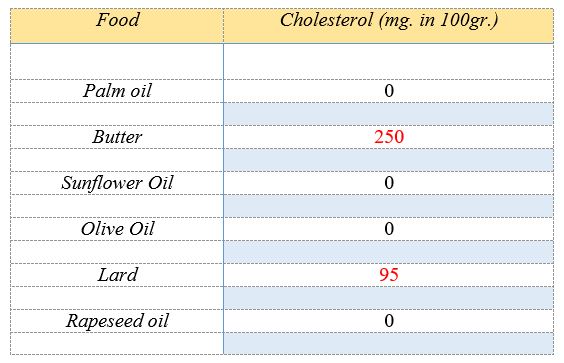 A comparison with other vegetable oils has revealed that there is substantial similarity when it comes to cholesterol. So why is it, therefore, that this ingredient is so discriminated against, compared to similar products, with accusations regarding cholesterol (which isn’t there)?

The scientific journal, Alimentazione, Prevenzione & Benessere (Food, Prevention and Well-being) edited by the Nutrition Foundation of Italy (NFI), in issue 1 of 2017, reported the findings of a symposium organised by the same NFI, entitled Uso Alimentare dell’olio di palma .Effetti sulla salute umana (Effects on human health. The use of palm oil as food). The symposium was held in May 2016 and the scientific conclusions (also published on the international Journal of food sciences and nutrition) were subscribed to by some of the most important medical-scientific companies and different representatives of university departments. With regard to the issue discussed here, we quote a passage that is fairly clear:
“The impact of palm oil on coronary risk in reality appears negligible. This is probably due, in part, to the minor prominence, in this respect, of saturated fats (that emerges, for example, from the recalled De Souza meta-analysis), but also because of the location of saturates in the palm oil’s triglycerides, which, as hinted at previously, favour more the elimination through the faeces than absorption, or also because the intake of saturated fats (palm oil included) does not change the relationship between LDL cholesterol (proatherogenic cholesterol) and HDL cholesterol (the so-called good cholesterol).

The same conclusions were arrived at by the extensive study conducted by Doctors Elena Fattore and Roberto Fanelli of the Mario Negri Institute for Pharmacological Research. The study entitled Palm oil and palmitic acid: a review on cardiovascular effects and carcinogenicity carried out a comparison between palm oil and other vegetable oils (animal fats are excluded in as much they are cholesterol rich) with regard to the impact on the two types of cholesterol, namely LDL “bad” and HDL “good”. What was the outcome? No significant differences were found between the use of palm oil and that of other vegetable oils from the standpoint of cholesterols. And, wait for it, neither between olive oil and palm oil!

We have demonstrated, with a comparative study, that where palm oil has been substituted, no substantial improvements have occurred in the levels of saturated fats. Medical studies, conducted by qualified researchers, also confirm that it does not impact in any way on the levels of cholesterol, in particular the bad type. Thanks to science, even this falsehood, aimed at confusing consumers, has been totally disproved.
Now that yet another hoax has failed, what will they cobble together next time in order to condition our choices still further? Let’s be on our guard!

DOWNLOAD AND READ THE FULL REPORT – Palm oil and cholesterol