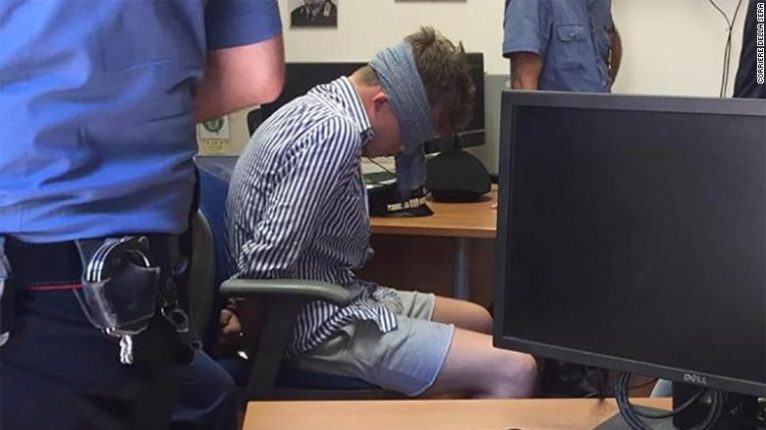 How liberal democracies guarantee individual liberties, even to those who commit a heinous crime.

Recently, an Italian police officer was stabbed to death eight times by two American tourists. The two Americans, 19-year-old Finnegan Lee Elder, and his 18-year-old friend Gabriel Christian Natale Hjorth, allegedly admitted to the stabbing of 35-year-old Carabinieri officer Mario Cerciello Rega. Supposedly, the two Americans stole a bag from a drug dealer and arranged a meeting to try to sell it back for 100 euros and a gram of coke. The drug dealer called the police and told them about the meeting. The officers were not in uniform and there is controversy surrounding whether they identified themselves as police officers. They were tracked down and found in their hotel near the Vatican, the knife that was used was hidden in a ceiling tile.

Following their arrest, a photo of one of the teens was posted online showing him blindfolded. Regardless of the crime, the blindfolding of Natale Hjorth is a violation of his rights guaranteed by the constitutional liberal system of western democracies and threatens the ideals of liberal democracy. You may like it or not (nobody is asking you to be sympathetic with the two alleged killers), but this is the essence of liberty. And we need to defend this principle with all our efforts.

Illiberal democracy refers to nations where, while elections are held, there is a guaranteed win for the reigning leader and the citizen’s voice does not matter. Democracies such as these represent the first step away from liberal democracies, citizens’ liberties, and the checks and balances system.

The rights afforded to citizens against State brutality are of the utmost importance. Without them, confessions are nullified by the idea that they have been coerced, and less and less people trust their local law enforcement officers. Furthermore, it allows for dangerous leaders to imprison adversaries who have done nothing but defy them, and then torture them into confessions.

Without the balance of power regarding law enforcement and citizens’ liberties, Governments have the power to impose their reign further, and more easily corrupt law enforcement regimes into enforcing their rule.

With this, illiberal democracy can flourish.

It allows leaders to put away adversaries and guarantee their further rule. It allows for further corruption in the government and represents the weakening of constitutional as well as liberal democracy.

With the rise of illiberal democracies across the world, it is ever more important to show the differences and advantages of liberal democracies. By giving too much power to law enforcement, and by allowing them to ignore individual rights to a fair trial, we are instigating the first steps of the switch to illiberal democracies where citizens simply think they have freedoms but do not in reality. Or worse, we start the transition to even more dangerous governmental structures such as authoritarian, or dictatorship.

Nowadays, there is a dangerous comeback of the State acting as a Leviathan, affecting our daily activities and invading our private space. This is a threat to citizens’ freedom that we must fight.

There are numerous reasons why such actions like blindfolding citizens in police custody should be reprimanded.

In a constitutional democracy, even criminals have rights. If we deny them their rights, then we are no better than the criminals, ie those that aim at depriving us of our liberty. We have to show them that liberal democracies are stronger and better.

Citizens have the right to a fair trial. Citizens are not guilty until proven so. And citizens should not be blindfolded, coerced, or hurt before (or after) trial by law enforcement personnel. These are the basis for forming liberal democracies, the type that aims to show citizens how free and considerate societies prosper.